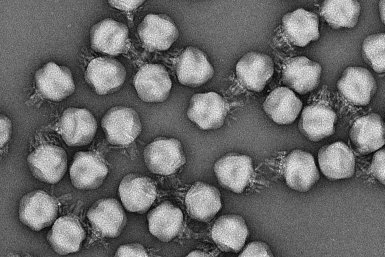 We are all the same, yet we are all different. New research from bioinformatician Bas Dutilh at Utrecht University has shown how a family of tiny viruses lives the guts of humans around the world, yet changes depending on which country we are from.

In a global collaboration with more than 100 scientists drawn from 65 countries, the team analysed sewage and faecal samples. In a publication in Nature Microbiology on 8 July, they describe that the virus crAssphage can be found in one-third of the countries of the world.

CrAssphage is a common virus that can be found in the human gut. It is a bacteriophage that infects bacteria. In 2014, Bas Dutilh discovered crAssphage by serendipity. “We were analysing large-scale data using our new tool, cross-assembly (crAss), and found this bacteriophage. We called it crAssphage, after the computational tool”, says senior author Bas Dutilh. “It was surprising that so far scientists had overlooked it. Once we knew what we were looking for, we could find the genome in lots of samples. By the time we published the paper describing that work, we had looked at all publicly available metagenomes — 2,944 at that time – and found crAssphage in 73 percent of the human faecal metagenomes that were then publicly available.”