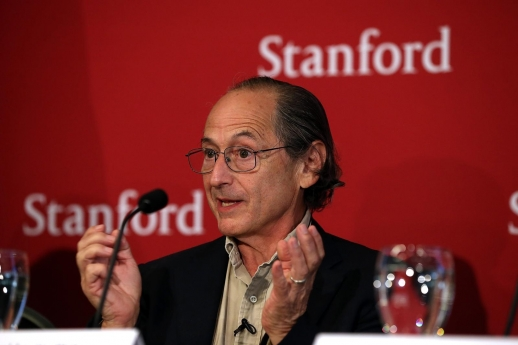 Posted at 15:32h in News by Administrator
Share
Last year’s Nobel Prize laureate in chemistry Michael Levitt, professor of Structural Biology of Stanford University, gives a lecture at Utrecht University on December 11th at 16.00 hrs. Together with the two other laureates, he successfully developed methods that combined quantum and classical mechanics to calculate the courses of chemical reactions using computers. In his lecture he will describe the origins of computational structural biology and then go on to show some of the most exciting current and future applications. Levitt is in Utrecht because he is member of the PhD defence committee of João Rodrigues (Computational Structural Biology (NMR))
When he was awarded the Nobel Prize, Levitt said the award recognised him for work he had done when he was 20, before he even had his PhD. “It was just me being in the right place at the right time and maybe having a few good ideas.” He added it was nice to see that computational science, computational biology is being recognized. “It has become a very large field and it’s always in some ways been the poor sister, or the ugly sister, to experimental biology.”
“Post-prize ambitions”
Levitt’s diverse interests have included RNA and DNA modeling, protein folding simulation, classification of protein folds and protein geometry, antibody modeling, X-ray refinement, antibody humanization, side-chain geometry, torsional normal mode, molecular dynamics in solution, secondary structure prediction, aromatic hydrogen bonds, structure databases, and mass spectrometry. His current postdocs work on protein evolution, the crystallographic phase problem and Cryo-EM refinement. Also he still is an active programmer. He says his “post-prize ambitions” are two fold and likely inconsistent. “Work single-mindedly as I did in the mid-1970’s on hard problems and help today’s young scientists gain the recognition and independence that my generation enjoyed.”
Biography
Born in South Africa 1947, Levitt visited London aged 16 to be profoundly influenced by John Kendrew’s 1944 BBC TV series ‘The Thread of Life’.  After a BSc in at King’s College London and a year with Prof. Shneior Lifson and his PhD student Arieh Warshel at the Weizmann Institute in Israel, he joined the Laboratory of Molecular Biology in Cambridge. His PhD thesis on Protein Conformation Analysis described use of classical force-fields and introduced energy refinement.
He went back to Israel as an EMBO postdoc. There, collaboration with fellow Nobel laureate Arieh Warshel resulted in new multi-scale approaches to molecular modeling. They developed coarse-grained models that merge atoms to allow folding simulation and hybrid models that combine classical and quantum mechanics to explain how enzymes works by electrostatic strain. In 1974, he returned to Cambridge for three years, then spent two years with Francis Crick at Salk and seven years at the Weizmann Institute in Israel. Since 1987 he works at Stanford University.
Lecture
Title: Birth and future of multi-scale modelling of macromolecules
Date and time: Thursday 11 December, 16.00 hrs
Location: Boothzaal, Universiteitsbibliotheek, De Uithof, Heidelberglaan 3, Utrecht
Attendance: free but registration desirable atscience.secr.nmr@uu.nl
More information: Prof. Alexandre Bonvin,a.m.j.j.bonvin@uu.nl