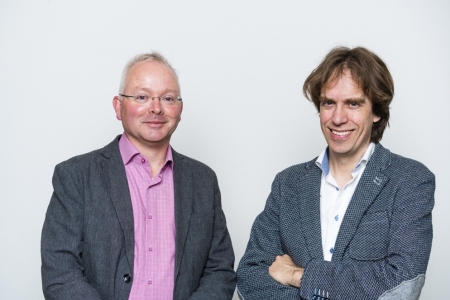 Professors Albert Heck and Alexander van Oudenaarden have both been presented with an NWO Spinoza Prize, the highest scientific honour in the Netherlands. Heck and Van Oudenaarden are considered leaders in their fields by many around the world. Both are pioneers in the field of biomolecular research, professors at Utrecht University and conduct their research within the Utrecht Bioinformatics Center.

The Spinoza Prize includes a cash award of 2.5 million Euros, which the researchers are free to spend as they see fit. Each year, the funding agency, NWO, awards the Spinoza Prizes to a maximum of four researchers who are among the very best in their fields.

Proteins and the role they play in our cells

Albert Heck’s research focuses on identifying all of the proteins in the human body and the role they play in our cells. This provides entirely new insights for research into disease and health, and offers opportunities for the development of new and better pharmaceuticals. As a pioneer, Heck has made major contributions to the biggest global breakthrough in the proteomics field; his findings also facilitate connections to other fields of study. His unique combination of expertise in the technical development of mass spectrometry, together with his large-scale protein research makes him a much-sought-after partner internationally. The techniques he has developed are used in biomedical laboratories around the world.

Heck (1964) was appointed Professor of Biomolecular Mass Spectrometry and Proteomics at Utrecht University at the age of 33. As the Scientific Director of the Netherlands Proteomics Centre since 2003, he has positioned our country as one of the world’s top contributors in the field of proteomics. He has already received several international awards, including the American Chemical Society’s Frank. H. Field and Joe L. Franklin Award in 2015, which is rarely awarded to researchers outside of the United States.

>> Science in the spotlight: Albert Heck
>> Video of Albert Heck explaining his research
>> Interview and more on the website Funding Agency NWO

How cells can develop into different types

Alexander van Oudenaarden studies how cells can develop into different types of cells, each with their own specific characteristics and functions. Internationally, he is considered to be one of the founders and leading scientists of this relatively new field of single-cell biology . Van Oudenaarden paves the way in the development of new research methods, in which he combines techniques from developmental biology, molecular biology, physics, mathematics and computer science. This has led to important new insights about the origins of diseases; for example, the understanding that cancer cells are often diverse, which makes it clear that custom-tailored chemotherapy is needed.

Van Oudenaarden (1970) is general director and group leader at the Hubrecht Institute,  Royal Netherlands Academy of Arts and Sciences. In 2013, he was appointed to the position of Professor of Quantitative Biology of Gene Regulation at the Utrecht University in the faculties of Science and Medicine. After earning his Ph.D. at TU Delft, van Oudenaarden completed his post-doctoral training at Standford University in the United States. At the age of 38, he was appointed as a professor at the Massachusetts Institute of Technology (MIT), and in 2012, moved back to the Hubrecht Institute for Developmental Biology and Stem Cell Research.