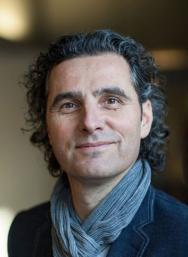 Posted at 10:30h in News by Celia Nijenhuis
Share

Alexandre Bonvin is Professor of Computational Structural Biology. He tells us about his research and what the Utrecht Bioinformatics Center means to him. “In a way, we are working with three different kinds of networks: we are studying networks of proteins, for which we need networks of people, to do calculations on networks of computers.”

“All three words in the term Computational Structural Biology seem to point to other research areas. In brief, I use computers to study molecules. We look at the structure of proteins, focusing mainly on the interaction between them. Protein sequences contain information that help us to predict these interactions. If we know that two proteins interact with each other, we try to find out how and where they connect and how strong their bond is.”

Why is it so difficult to find out how proteins interact?

“It is important to realise that proteins and other molecules are actually very social creatures, and they are hardly monogamous. On average, a protein has up to ten different partners, which means that there are many more interactions than players, and it’s difficult – but important – to understand that network. Why? Because miscommunications are very dangerous. When people miscommunicate, you get arguments, but when proteins miscommunicate, you get diseases.”

How can you use that knowledge for practical purposes?

“We are occasionally contacted by colleagues at UMC Utrecht who have discovered that one of their patients has a mutated protein, and they want to know what can go wrong now. For example, if a protein cannot bind to other proteins anymore, a miscommunication arises that may cause a disease. In other cases, you can actually work the other way around: sometimes it can be beneficial to evoke a miscommunication between proteins in order to treat a certain disease.”

Why do you find the communication between proteins so fascinating?

“In a sense, it was just a matter of serendipity that I got into this research area. We encountered an interesting problem and we just happened to be the first group to solve it. The timing was perfect: a lot of researchers worldwide were facing similar problems, and there was a lack to tools to tackle them. We came up with a solution and the computational means to solve our problem. One of the tricks we used was to develop a method to translate heterogeneous and ambiguous information about proteins into a model that we could use to perform calculations. With this method, we could suddenly use all kinds of information sources in the modelling process. That turned out to be interesting for a lot of people.”

What advice would you give your fellow researchers?

“Think about your users and your collaborators. I think one of the reasons why our method is so successful is that we really did our best to make it user-friendly. This type of research requires large amounts of computation, and we spent a lot of time developing a computer program, called HADDOCK, and a user-friendly web interface to it. It is used by more than 6,500 people worldwide, including some large pharmaceutical companies. The computations are performed on clusters here in the lab and on a worldwide grid of computers.”

“Networks of collaborators are always important, but even more so if you’re working with large facilities. In 1995, the Utrecht NMR facility started as a European facility, so we already had a network of researchers. We were one of the first life science research communities to get into grid computing, which had previously been mostly the domain of physicists. That meant that we had to invest a lot in setting up an infrastructure, showing that it worked, and then lobbying for extra resources. Of course we prefer to work on our research rather than on the infrastructure, but you need to invest time and effort into a good infrastructure before you’re all set to do the research.”

What does the Utrecht Bioinformatics Center mean for your research?

“At the moment, the Utrecht Bioinformatics Center collaborates mostly on the infrastructure and education. We all do a lot of heavy calculations, and the technological and computational challenges bind us together. The high-performance computing facility is more or less the glue in the system. UBC makes it much clearer who is working on what. Of course we knew each other a little before UBC existed, but there wasn’t a structural collaboration, we would sometimes run into each other and discover that we were doing similar things. An additional benefit is that we are much more visible to the outside world. We want to be a big international player, and UBC definitely helps with that.”

“I think we should be much more visible when it comes to education. Of course there are already a number of different Bachelor’s and Master’s courses, but it would be good if prospective students with an interest in bioinformatics would think of Utrecht as their preferred destination. We do work on bringing the courses currently offered together into study programmes, and adding more programming courses. It’s a bit of a challenge, since we are really working on the edge between chemistry and biology. But when you think about it, the organisational borders are very artificial anyway.”