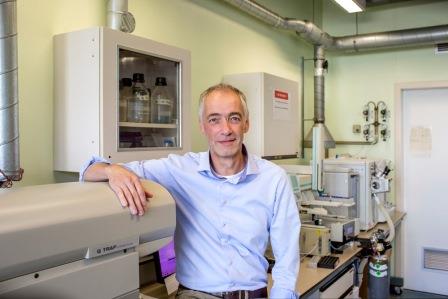 Posted at 08:56h in News by Celia Nijenhuis
Share

Bernd Helms on the added value of bioinformatics: “The UBC is a lively kitchen cooking up ideas”

“What do I do? I wear so many different hats. I would like to say that I spend most of my time on research”, says Bernd Helms with a chuckle. Helms is Professor of Veterinary Biochemistry at the Faculty of Veterinary Medicine. But he is also the head of the Department of Biochemistry and Cell Biology, and programme leader for the graduate school ‘Biomembranes’. “It’s not really that big of a department, so being the head mostly involves networking, a bit of politics, and ensuring that research, especially fundamental research, remains an integral part of Veterinary Medicine. That is vital not only for the Utrecht Bioinformatics Center, but also for the faculty and my own research.” Bernd tells about his role within the UBC and how he envisions the future of the bioinformatics center.

“I represent the Faculty of Veterinary Medicine in the UBC, so I sit in on the advisory board meetings. The UBC is a research center in which internationally leading research groups cooperate. Right now, it includes groups at Utrecht University, UMC Utrecht, Hubrecht Institute and Princess Máxima Center. Within Utrecht University three Faculties are involved: Science, Medicine and Veterinary Medicine. We occasionally get together to brainstorm on questions such as: What is our current situation with the UBC? Which direction should we be heading? Our goal is to give the board of the UBC input from the various points of view.”

Fats are slippery fellows
“Around the world, three different consortia are working on the development of lipidomics: LIPID MAPS in the United States, LipidBank in Japan and in Europe we had LipidomicNet. We are one of around five groups in Europe that are able to do lipidomic analyses. I think that our lipidomics facility is fairly unique, thanks to our combination with bioinformatics.” “My research needs led me to make contact with Berend Snel (Professor of Bioinformatics and Chair of the UBC, ed.), but we aren’t at the point yet where the UBC plays a clear role in my own research into lipidomics, or fats. In lipidomic research one uses bioinformatics in a completely different way than someone who applies bioinformatics in the fields of evolution, genetics or proteomics, for example. All of those fields that need bioinformatics have their own specific requirements. Lipidomics lags a bit behind proteomics and genomics, because of the techniques they use. In addition, lipids are a bit harder to get a grip on.”

180,000 types of fat
“Why is that? Well, there are just so many types of lipids and fats. Most people are familiar with Omega 3 and Omega 6, as well as with cholesterol. But the human body contains tens of thousands of different kinds of fats. We estimate that there are around 180,000 types of fat on earth. People have no idea of the scale of the field; it’s a completely different dimension. Ten or 20 years ago, people thought in terms of lipid classes categorised into groups, and we assumed that all of the fats in a specific class would act in the same way.

Since then, we have learned that there is a huge variation within the classes, such as the degree of saturation or unsaturation, the position where the unsaturation is located, and so on. That position, for example, is very difficult to measure.”

Fat research is gathering momentum
“The technique is based on mass spectrometry. You shoot a molecule into the mass spectrometer and see what mass it has. But if an otherwise identical lipid has a double bond in a different location, then the only difference is the position. It doesn’t have a different mass, so a specific mass doesn’t equal a specific lipid. In fact, in theory, hundreds of different lipids could all have the same mass. So we get to the point where we have to use other techniques in combination with mass spectrometry. That’s where bioinformatics has an important part to play. The enormous technological developments, combined with bioinformatics, present so many new opportunities that cause lipidomic research to pick up momentum.”

Opportunities virtually unlimited
“Thanks to bioinformatics and all of the other new developments, the opportunities are virtually unlimited. But that means we have too much work to do. We now have so much information! Each one of the tens of thousands of lipids in the human body, and the 180,000 lipids on earth, all have a function. For example, we’ve recently discovered that a certain group of lipids all act the same when a specific liver cell, called the stellate cell, is activated. They move up or down or some other direction, so they act like one class of lipids. But there are also fats in these cells that act like a single species. So apparently, in that entire class of lipids there is a single molecule, a single fat that acts completely different from all of the others in its class. And we don’t have the foggiest idea why that is.”

A massive avalanche of bioinformatics

“A whole avalanche of bioinformatics is approaching us, which already has provided us with a wealth of new information. That means we have to reconsider basic concepts, such as what do those fats mean? For almost every fat molecule, we have to ask ourselves whether it has been assigned to the right class. And there may be individual fat molecules that have their own role. How do you deal with that? We would like to process that enormous amount of information, but we simply lack the manpower.”

Lipidomics needs bioinformatics
“There are many groups at the Faculty of Veterinary Medicine that would like to work with bioinformatics, but bioinformatics is a growing field. The original idea was to hire one person who understands bioinformatics and who has an inter- disciplinary mindset. But that one person could never be an expert in every facet of bioinformatics. People are slowly beginning to understand that. Luckily, our group actually has two staff members dedicated to be active in the field of bioinformatics. They know much more about it than I, because I think more in terms of the biology behind lipidomics. The guys here who are specialised in bioinformatics need interactions, networks with other people in other areas of bioinformatics, so that they can ask one another: Hey, how do you deal with this? I think that one of the main goals of the UBC at the moment is to bring people like that together.”

Joint platform
“We’re still in the initial phase, so things can only get better from here. The UBC has been set up in the past five years or so. The players have been identified, and now the question is: What’s next? The most logical step is a joint platform to bring bioinformaticians together. That’s not the case at the moment. There are plenty of ideas, so now the experts have to meet one another and exchange ideas. After all, it will only work in a bottom up approach. If those specialists start working together and start taking a look in each other’s kitchen, then that will create new ideas. If those ideas lead to new results, then we are making some real progress. I hope that we’ll take that step soon.”