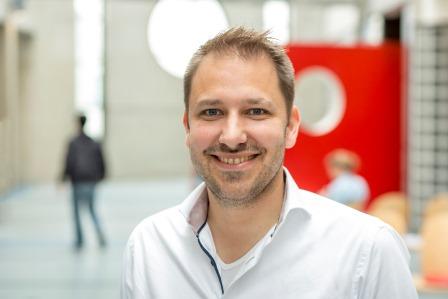 Posted at 08:30h in News by Celia Nijenhuis
Share

“We continually need to ask ourselves how our research will benefit patients.”

Jeroen de Ridder grew up in Utrecht, studied Electrical Engineering at TU Delft and earned his PhD in a joint position hosted by the Netherlands Cancer Institute and TU Delft on the application of data science and machine learning on biological datasets of cancer. Following a tenure track as assistant professor at TU Delft, he has now returned to the city of his roots as Principle Investigator within the  Center for Molecular Medicine of the UMC Utrecht and the Utrecht Bioinformatics Center. Associate professor Jeroen de Ridder talks about his first month in Utrecht and why this is the right place for him.

“Bioinformaticians are quite popular,” laughs Jeroen during our meeting in the University Medical Center (UMC) Utrecht, where he started work on 1 May. He is referring to the prominent place that the analysts of large datasets currently have in a wide range of research projects. This means that bioinformatics  is becoming increasingly interdisciplinary. Life Scientists are doing more and more computer programming, while Computer Scientists are increasingly involved in puzzling over the biological questions. Although this is a positive development, Jeroen does think it is still going much too slowly.

“Interdisciplinary science is a wonderful thing, but universities are having trouble dealing with this development. The reason is that universities are still often divided into mono-disciplinary pillars. Research projects are brought under a specific faculty and grants can often only be requested for a specific field, while our strength lies in finding the synthesis between life science and computer science.”

Jeroen has found this synthesis at the Utrecht Bioinformatics Center (UBC), of which his research group is a part. Jeroen describes the joining of computational and molecular research within the direct context of a university hospital as a “strong marriage”.  “It is fantastic to see how this cross-pollination within the UBC has been so efficiently organised. That was an extra reason for me to come to Utrecht.”

Jeroen is trying to identify patterns in large datasets and integrate different datasets. For example, he is studying whether the activity of certain genes differs for patients who do not respond well to a specific drug. The patterns this reveals could be used to predict how future patients will respond to this drug. “This is known as supervised learning,” explains Jeroen. “I am hoping this research will help me find new biological patterns, but I also hope to develop new and generally applicable algorithms and computational methods.”

Before Jeroen started work in Utrecht, he was working on a project to facilitate the interpretation of large numbers of mutations. “A tumour is full of mutations, but where people used to think that mutations were only tumorigenic if they were in a gene, we now know that mutations can cause tumours in many different ways,” he explains. “All the genes combined account for only about 2% of DNA. It is now completely clear that the remaining 98% – which we had never examined properly before – is also extremely important. However, finding mutations in that 98% is difficult because of the huge computing power and correspondingly large budget required. And even after you do find them, it is not immediately clear which ones have a negative effect.”

At the UMC Utrecht, Jeroen shares a room with Wigard Kloosterman, assistant professor of Human Genetics and specialist in identifying structural variations (a special type of mutation). “When Wigard and I grabbed a coffee together in my first week here, I told him how I wanted to develop a kind of Google search engine for mutations, so that one can prioritise them according to their importance.  We conceived a technique for applying this to structural variations while sitting in the coffee corner. That was enough proof for me: there is expertise here, and people who can quickly connect different ideas.”

Jeroen and Wigard wrote a research proposal for a grant application which is currently being assessed by the Netherlands Organisation for Scientific Research.

Jeroen thinks that the added value of having Utrecht as a base for his research lies in the presence of a university hospital. “All our research is defined by the clinical demand,” he explains. “We continually need to ask ourselves how our research will eventually benefit the patients, be it in the short or long term.”

Jeroen believes scientists should ask themselves this question more often. “It is tempting for a scientist to say: I’ve published my research, now you see what you can do with it. Scientists are accountable for their publications, but what happens afterwards need not be their concern, if they choose so. However, if you want your results valorised – if you want to know what the real practical value is for the patient or society – then you need to take an extra step. If more scientists would take this step a little further and consider their return on investment, then research would be able to generate many more benefits.”

This return on investment is not getting enough attention in the current research system, thinks Jeroen. The period between the publication of the results and the moment the work is validated and a clinical application is found is so long, that researchers lose touch with the final results.  “We often only get halfway through this cycle. Scientists should be rewarded more for completing the cycle.”

Jeroen’s own goal is clear: he wants to establish a clear research line within bioinformatics and contribute to the foremost research carried out at the UMC Utrecht, Utrecht University and the UBC. His dream is to make a discovery that will really help patients. “One day, I would like to be able to say: look, this mechanism or this biomarker was found using my method and now it is being used on patients in the hospital. So it is a real plus that I am working so close to the hospital here. I think I will be here for a while yet.”